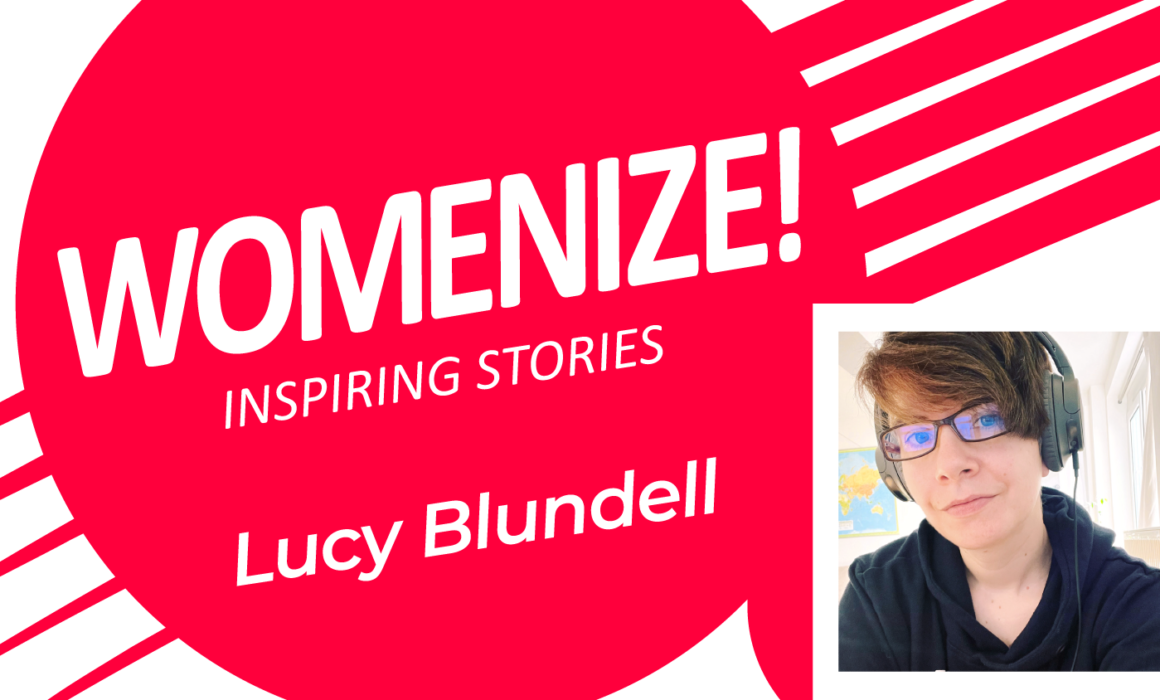 Womenize! – Inspiring Stories is our weekly series featuring inspirational women from games and tech. For this edition we talked to Lucy Blundell, also known as Kinmoku, developer of “One Night Stand”. Read more about Lucy in this interview:

Hi Lucy, thanks for taking the time to talk to us! As Kinmoku, you’re an award-winning indie game developer. What did your journey towards your current profession look like?

Thank you for having me! I came from an art and animation background and since then I’ve been working in the video game industry for over 12 years.

I studied animation at the University of Salford, did a short internship as a 3D artist, then went on to work as a Graphic Designer for Chillingo, who, shortly after, were acquired by Electronic Arts. Whilst I was there, Chillingo published hundreds of mobile games, including the original “Angry Birds”, “Cut the Rope”, “Iron Force” and “Contre Jour”.

When I started at Chillingo, it was a small studio, so I wore many different hats in my role as a Graphic Designer. I would design App Store icons, prepare marketing materials, design magazine adverts, help smaller developers with in-game artwork, design wall art and promotional items for events, skin “Crystal” (Chillingo’s gaming network), and more. Chillingo quickly expanded, and I soon led the creative services team there.

Seeing hundreds of games over those years was a great experience for me to learn all about game design, marketing and publication. Over time, I gained the confidence that I could design my own small games, so when the time was right, I left to pursue my dream of becoming an independent game developer, which I have been doing for over 7 years now.

Tell us more about your game, “One Night Stand” – what kind of game is it and what was your intention when developing it (and maybe you can tease us with some info about your upcoming project, too…?)?

“One Night Stand” was originally made for the Nanoreno game jam in 2016 – a month-long visual novel jam that takes place every March. For this, I needed to keep the idea small to be sure I’d finish in time. I decided to set the game in a single room with only one character, and I’d admired rotoscoped animations for a long time, so I wanted to try them out in a visual novel.

With all this in mind, I started coming up with small concepts to suit. One morning, I was on the tram and I saw a tired, hungover man clamber on, radiating “walk of shame” energy. It made me giggle, though I also felt sympathetic towards him. It made me realise there are lots of emotions around one night stands, and they’re rarely talked about in the media, so I thought it’d make a perfect short project.

After the month was up, I posted the free game jam version of “One Night Stand” on itch.io and was unsure how it would be received… but, after a few days, reviews started to appear, shortly followed by Let’s Play videos from famous YouTubers, and then the downloads went wild! People were really enjoying the game and asking for more, so I made “One Night Stand” into a fuller experience. I spent another 6 months polishing it, adding more endings, animations, music, and properly marketing it. The full version of the game released on Steam in November 2016, and the console port by Ratalaika Games arrived a few years later in October 2019.

“One Night Stand” has been a huge success and bought me lots of time to develop my next project, which I plan to release later this year. Though I haven’t formally announced my next project yet, I can say that it is a longer narrative experience, set in the early 2000s, which explores the interactions of online relationships. Like “One Night Stand”, it’s full of laughs whilst being sincere and sweet. Please keep an eye out for updates via my social media feeds and newsletter!

Which advice would you give someone who might be unsure if taking the path as an indie game dev is the right one for them? How do you deal with some of the challenging aspects of it all?

Every independent game developer’s experience is different. I was really lucky to have a successful game, but I launched “One Night Stand” in 2016 when the marketplace was less saturated than it is now. Whilst I love encouraging people to follow their dreams, it’s important to think about it logically and set yourself up for success. For example, maybe it is safer to pursue indie development in your spare time as a hobby or reduce your job’s working hours before diving straight into full-time independent game development. I dived straight in, but only because I was young, confident, thrifty and, most importantly, had personal savings.

It’s very important to plan for short development time, too. Ideally, you should plan development time to be 1/4 of the time you can afford. Do you have enough savings to pay rent and living expenses for 2 years? If so, do not plan development to take longer than 6 months. It’s key to keep your ideas small and tangible so you’re able to finish your game – I remind myself of this daily!

You also need to be confident in your knowledge of game design. I wouldn’t have taken the leap if I hadn’t previously worked on hundreds of other games – they helped me learn why some games shined more than others. However, this isn’t a requirement: there are a few successful indie developers who’ve never worked in the video game industry before… but it’s important to remember this is extremely rare. I believe work experience, keeping an eye on current trends, and constantly learning about game design will build a strong foundation for success.

Other important traits for an independent game developer are being analytical, self-critical and self-motivated.

Though, for a solo developer, I think an element of quirkiness is necessary, too. Your game will need to compete against thousands of others, so something needs to set it apart and be unique. It’s also good to understand your skillset: Are you a jack-of-all-trades or someone who’s specialised in one or two areas? Not every indie developer works alone: many work in small teams, sometimes remotely around the world, and this is great if you want to make a larger project and focus especially on each element of the game.
However, having a team can have its difficulties, like funding or finding the right people, so working solo can be a viable option, too. Working solo does have its own set of challenges, such as loneliness, motivation and tolls on mental and physical health, and I’ve personally found it very tiring having to do everything myself. On several occasions, I have taken breaks and adjusted my work-life balance to combat burn-out and illness.

Before becoming an indie developer, I had skills in story writing, art, design, animation and sound, though I didn’t know how to program. For many years, I held out hoping I would find a programmer to work with, but for some reason it never happened. So, whilst I was still employed, I taught myself how to code in Ren’Py (a visual novel engine), in fact, part of the reason I make visual novels is because my programming ability is basic, and visual novels are simpler than most traditional video games.

Nowadays, there are a huge choice of video game engines where you don’t need to know any programming to get started. If becoming an indie developer is something you’re thinking about, I recommend downloading a game engine and making a small game. Try out GameMaker, Construct 2 or RPG Maker if you’d prefer not to program, or Ren’Py, Unity or Godot if you’d like to learn a little.
Game jams are great for this, and most can be found online at itch.io. If game jams and engines sound too intimidating, you can also learn about game design with games like “Super Mario Maker” and “Game Builder Garage”, where you can bring your game concepts to life.

Game development is more accessible now than it’s ever been, and people from all walks of life are now able to give it a try. Understanding yourself, how you work, what role you want to play and what your ultimate goal is are questions you should ask yourself before becoming an indie developer.

It’s never too late to get into game development!

Thanks for sharing your story with us, Lucy!