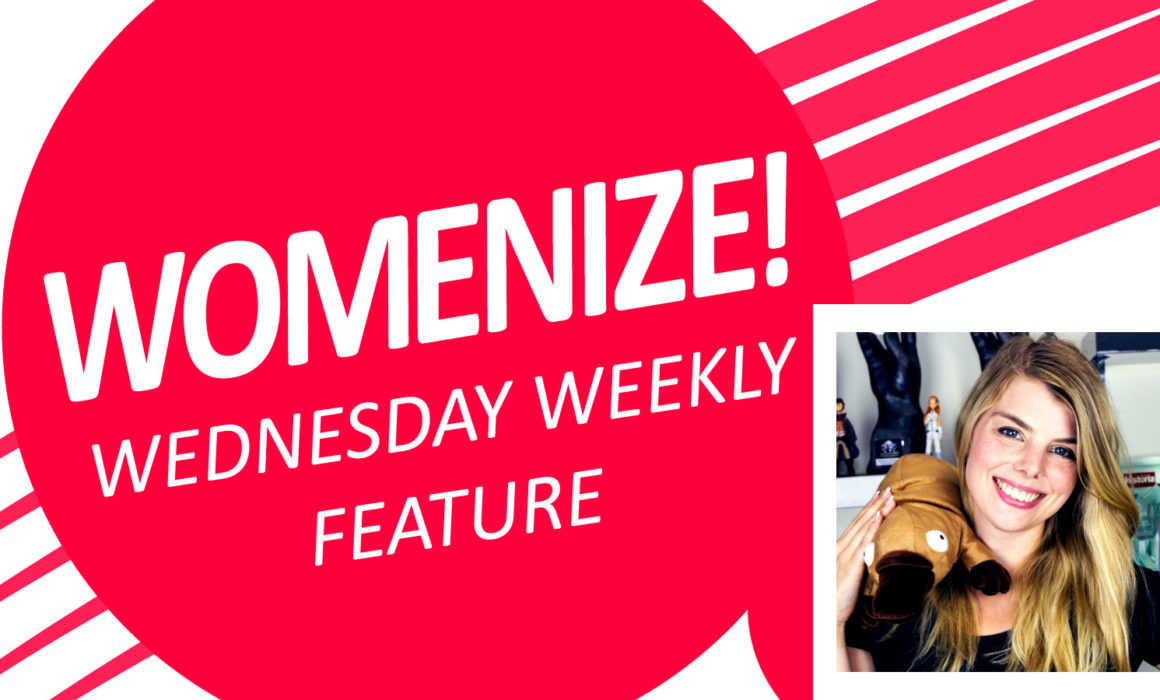 Womenize! Wednesday Weekly is our weekly series featuring inspirational women from games and tech. For this edition we talked to the Head of Communications at Daedalic, Sandra Hübner. Read more about Sandra in this interview: 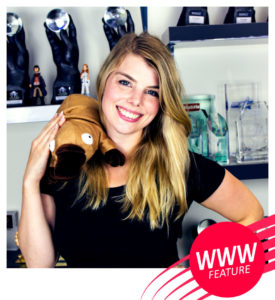 Hey Sandra! You are the Head of Communications for Daedalic. Can you tell us a bit about what you do and how a average work day looks for you?

As Head of Communications I’m responsible for all Marketing, PR, Social Media, Event Management and Advertising topics. With the help of my team I address any communications inquiry, product and corporate wise. For example, we’re responsible for communication plans for every product launch and organize our booths at big trade shows from scratch. Therefore, I don’t have a typical workday as every day is related to the task at hand. Right now, I’m busy organizing further PR and Marketing opportunities for our current release CryoFall. In addition, I plan our booth design at E3. Next week I could dig deeper into influencer relations for our upcoming titles or look further into improvements of our corporate website.

You started out at Daedalic as a PR Manager in 2015, after that you got promoted to the Head of PR and are now the Head of Communications. What advice would you give to people who want to further develop their career like you did?

I believe without passion for your working field and company you won’t accomplish big career steps. For me, Daedalic is an outstanding video game developer and publisher with plenty of unique titles I can relate to. Without that I couldn’t be an efficient communications leader. Due to my identification to the brand I can translate my passion to my work. PR and Marketing are emotional communication fields; you have to tell great, gripping stories and reach out to people in a meaningful way. I’m able to do that successfully because of my emotional bond with Daedalic. I’m certain that if you believe in something, then you can achieve it; with hunger to learn something new each day and devotion for your work.

Are there any recent projects of Daedalic that you’re particularly excited about?

I’m really excited about Daedalic’s biggest IP entry yet: The Lord of the Rings – Gollum. I’m in close contact with the producer and fascinated about their expert knowledge of the franchise, the ideas for the game and the gameplay mechanics. They want to deliver an outstanding game with fun and serious gameplay sequences. I believe that this title will surprise a lot of people because you still feel the DNA of Daedalic, but it has been evolved to a new thrilling approach.

Thank you for sharing your insights Sandra! 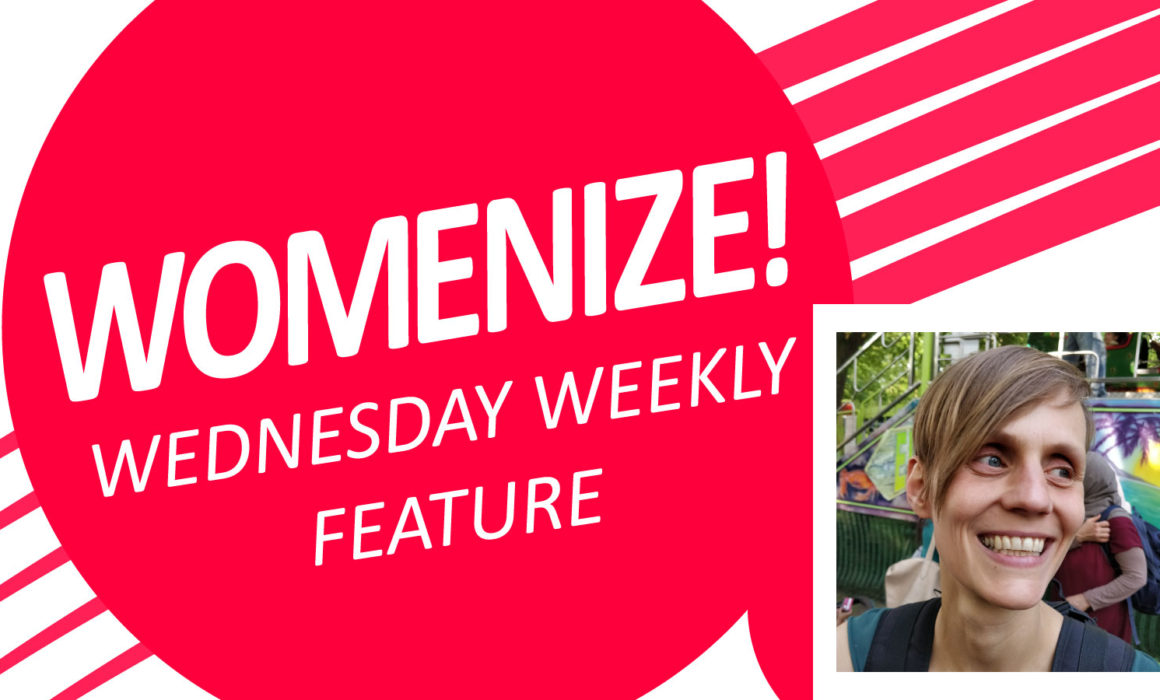 Womenize! Wednesday Weekly is our weekly series featuring inspirational women from games and tech. For this edition we talked to freelance Foley Artist, Sound Designer and Composer Almut Schwacke. Read more about Almut in this interview: 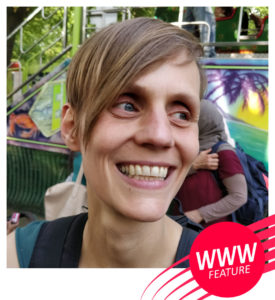 Hey Almut! You are a freelance Foley Artist, Sound Designer as well as Composer and have worked on games like Anno 1800 as well as several indie games. The work of a Sound Designer isn’t something that often gets talked about, could you tell us a bit about your work and the differences between those three fields?

Hi there! Let‘s start with the music. Working with music is nice because the appeal of music is so easy to understand for most people. I guess nearly everyone has been deeply touched by a piece of music or experienced how music connects us to memories and feelings. That‘s the beauty of it. But for me, as someone who has great appreciation for sound design and foley as well, also the downside. I‘d like lots of movies and games better with music used more sparsely. Sometimes I think directors or devs or other creators get scared and continuously have the urge to grab their audience by the hand and tell them what to feel through music. Music is a great way to initiate an emotion but it can also create distance, destroy the immersion. The impact of good sound effects and foley, that feeling as if you were in someone else‘s shoes, is often underrated. That being said it is always special and precious to access a specific emotion and translate it into music, I would not want to miss that part of my work.

So it‘s always very important aspect for me when I work on Sound Design or foley – to advocate for these sound layers and to do them as best as possible so people recognize they can speak for themselves. I‘d say Sound Design is the process of defining in your head what soundscape you need and then working out how to make that happen. I use libraries for all the things I cannot quickly, or at all record myself. For example explosions, weapons, motors, ambiences, stuff like that. Foley is then either used to supplement that or on its own.

So for those who don‘t know what Foley is – it is this weird craft rooted in the movie business of someone staring at a screen while walking in place or handling everyday objects in sync to the moving picture. It‘s a little different with games because games are non-linear, but the main thing is, it‘s about making all the little sounds that make a world believable and come to life that you could never get out of a sound library in an organic way. For me it is the supreme discipline of audio because it is incredible fun while also being very artistic, precise and detail oriented work. I like the physicality of it, I get to touch and fiddle with so many objects, it‘s a bit like playing hundreds of instruments. I also love that a lot of the things I‘ve accumulated over the past years have their own little story attached. When I get a thing out of my suitcase to work with I remember the person it belonged to, the situation when I got it, or the friend that gave it to me as a gift. I don‘t mean it in an esoteric way when I say I‘m sure this carries on into the end product. I‘m certain that the results of my work get better the more love I find in it, and those little objects-with-stories-attached induce a lot of love in me 🙂

Besides working in the games industry you are also working in the field of movies. What kind of differences are there between working on a video game and a movie, are there any benefits for each of them

Movies are nice because they‘re linear – you exactly know what will happen when and can compose and mix a soundscape that supports the storytelling perfectly. So the process is often very clear and defined. That is also what makes games more exciting to work on in my opinion. 🙂 You don‘t know what the players will choose to do and when they will do it, so you‘ll have to try and take all possibilities into account and make them work as best as possible.

Sound Design and Foley are pretty close together in games, closer than in movies. In movies it is typically very clear that the Foley Artist does all the sounds made by living creatures (except voices) – human and animal footsteps, clothes rustling, objects being handled like glasses, cutlery, door knobs, steering wheels, skin being touched etc. Only sometimes we support the Sound Design by adding specific layers like glass shard falling to the ground in a car crash. The whole process in movies is a lot about sonically re-enacting the movie character‘s actions.

In games the aspect where Foley really shines is variety. It is an excellent tool to have lots of variations where sound libraries often don‘t offer any or not enough variety on a specific sound. But just as in movies Foley can be used in games as well to define the whole world – what your objects sound like when touched or being walked on. Foley for me is sonic texture.

In an interview you’ve talked about how the sound design field is still a very male-dominated place, are there any tips you could give to women who want to start a career as a sound designer?

Yes, get in touch with me, I‘d love to mentor a young sound lady! 🙂 Other than that, ooh, I don‘t know. There are so many aspects to it…

I think it helps to try and recognize sexism patterns and then forming strategies of how to deal with those at home in your head while not under fire. It can be daunting to try and cater to those who don‘t believe you belong by being extra nice and not making a fuzz, or by joining the elbow society – I believe in neither. I say, find out who you are and what your strengths are and live your strengths. Try to raise awareness for aforementioned patterns, start out with allies who you trust and seek their support in raising awareness.

If you plan to have kids, find the right partner for that. Discuss parental leave, caretaking etc before it needs to be done. For me it was always priority to not fall into the standard trap: guy makes more money than woman, so naturally it‘s the mom staying at home and reducing paid work because otherwise the financial impact on the family is bigger. I‘m very happy that I managed to find a partner who like me would rather have way less money than establishing that pattern (yes, I‘m aware that this is a privileged thing to say, but interestingly enough it‘s mostly the privileged couples I see making that choice for money and against equality). The vast majority of sound designers are freelancers, and as a freelancer taking a long break from work is a risky thing to do, also freelancing sometimes requires more flexibility than employment. So within a family you need someone who‘s able to cushion the increased flexibility.

Most importantly though, believe in yourself. There is absolutely no reason why women should or could not be exceptional Sound Designers. Not a single one.

Thank you for your inspiring words, Almut!