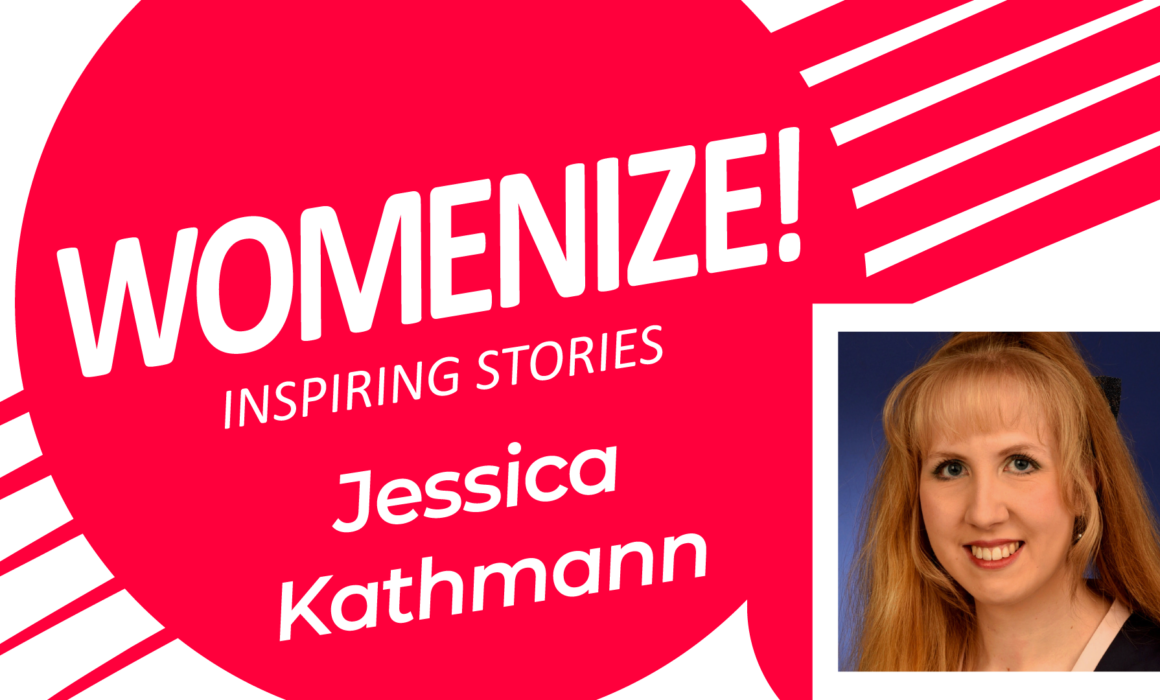 Womenize! – Inspiring Stories is our weekly series featuring inspirational women from games and tech. For this edition we talked to Jessica Kathmann, psychologist with a focus on games. Read more about Jessica in this interview:

Hi Jessica, thanks for taking the time to talk to us! You’re a psychologist who focuses on the intersection of psychology and video games. How did this quite extraordinary combination develop, and how does it reflect in your current occupations?

Thanks for inviting me! I’m happy to share a little bit about myself and my career!
I have been fond of video games for nearly my entire life. I started quite early on with gaming, I guess at the age of 8, but had my first experiences even earlier. Fortunately I grew up in a family that encouraged me in this – back then – quite men-dominated hobby and even got me games for my birthday or Christmas. As I grew older, games still played a role in my life, but in the first years of studying psychology I neglected them a little bit because I didn’t have a gaming pc in my shared apartment and could only play games when I visited my parents. But with getting my first job after finishing university I had enough money to buy a decent gaming PC. Up until that point I didn’t really think about the intersection of games and psychology, to be honest… Besides working, I also started a training in psychotherapy after Carl Gustav Jung which I’m still continuing.

My first job was a counseling job in some sort of school for young people who aren’t able to find job training or are unsure about what career they should choose. I encountered a lot of young folks there – mostly men – who were advised to seek some sort of counseling. As you can imagine, men between the age of 16 and 25 aren’t quite fond of talking to a psychologist so I needed an ice-breaker. I soon started to ask them about video games and that’s when I started to think about the connection of games and psychology, especially from a psychotherapeutic point of view. It was a quite explorative approach where I tried to find out whether there is a connection between the games you play and the topics you deal with on a mental level. And indeed: I found a lot of parallels! So I started to dig deeper and use these connections in psychotherapy.

A very brief case study to give an example, for privacy reasons I changed some infos:
Imagine a young woman, 18 years old, very tentative, distrustful, quiet. She was sent by her parents who feel that she is struggling with something, but they couldn’t put their finger on it. Talking to her was difficult for me as well, she hardly answered questions, but I somehow also got the feeling that there was indeed something she carried with her. But I also felt that it made no sense to directly ask what’s wrong or try to ask any “psychological“ questions at all because of her perceptible distrust. So instead we talked about her hobbies and she told me that she was into gaming, but you could feel that she expected me to have no idea of it. As soon as she learned that I was a gamer as well, she told me about her favorite games, all of them being survival-games. In her case, this totally made sense: In survival-games you have to survive in a hostile environment and I had the impression that she perceived the “real world“ in the same way: as a hostile place where you always have to be on your toes so you don’t get hurt. Of course you have to be careful with interpretations like these; there are loads of reasons why someone likes a genre or a specific game. But in her case, over the course of several counseling sessions, it was clear that there was this connection. So we used her in-game-experiences to talk about these topics of anxiety, distrust and – on the other hand – gaining power and confidence. I rarely tried to build bridges to real-world experiences, but it seemed to be enough to help her taking steps in her life, getting internships and being more open towards other people.

I stayed on that level for some years and gained experience and played more games with the question in mind what sense and meaning you could find in them from a psychologist’s perspective. Some day in 2019, I stumbled over the German podcast Behind the Screens, back then hosted by two psychologists. I really liked their approach of looking at topics about gaming from a psychological perspective, contacted them and in April 2020 I was invited as a guest. It seemed to be a match, because shortly afterwards they asked me to join the crew! From then on, I got more and more involved with the field of games and psychology. By now you can find articles and interviews with me (and us as a podcast) on several platforms, I get invited as a speaker and teach game dev students in psychology.

Which role can psychology play when it comes to game design?

Well, there is a multitude of possibilities! Psychology is about human thinking, feeling and behavior and these are all aspects that are important for game design. A quite obvious field is motivation: how can you design an enjoyable game? What psychological needs can a game fulfill? And, on the other hand: how can you do that without manipulating people? So, ethics is, especially in this context, a very important topic, too.

Furthermore, game design students are mostly taught some forms of player types. From a psychological perspective one can complement that by adding information from the field of personality-psychology, because most player-type-models aren’t grounded on empirical findings – an indispensable requirement in psychology.

A little bit less obvious, but a core field of psychological research, are topics like perception, attention and attention-guidance. They can be especially relevant in the context of VR-experiences with regard to motion sickness.

A topic I particularly enjoy teaching is mental health which can be divided into two subgroups: effects of gaming on mental health and portrayal of mental health in games. Fortunately, there are a lot of beneficial effects on mental health; studies have shown amongst others relief of depressive symptoms, but on the other hand you have to talk about excessive gaming and addiction as well, which is also closely related to youth protection. The portrayal of mental health related topics has ethical aspects as well as basic knowledge about the most common mental illnesses. When it comes to developing a game about a specific illness it is yet still advisable to consult clinical psychologists / psychotherapists and preferably patients as well. The most prominent example where this was done might be the game “Hellblade: Senua’s Sacrifice“, where you play a Pict warrior who is suffering from psychosis.

These were just a few examples of how psychology can be useful when it comes to game design – there are nearly endless possibilities! In our (German) podcast we already talked about some utopian and dystopian scenarios and whether psychology is the future of game development.

Tell us more about the podcast you host together with Benjamin Strobel, Nicolas Hoberg and Jolina Bering, the Behind the Screens podcast?

Behind the Screens is very dear to me! The German language based project started back in 2018 when Ben and Nicolas – who had been friends since studying psychology at the same university – noticed that a lot of the psychological theories they had learned could also be used to analyze video games and phenomena around gaming. The name “Behind the Screens” comes from the idea that the screen serves as some kind of dividing wall between the game with all its mechanics and logic on the one side and the player with all their thoughts, feelings and behaviors on the other side. While most analyses and journalistic work focuses on the game, psychology gives us the tools to analyze the player and the interaction between the player and the game.

As mentioned above, I joined the crew as a third member in April 2020. We have released 38 podcast episodes in total about a whole set of different topics related to games and psychology. We discuss topics like the effect of video games on mental health or whether games make us aggressive, we invite game developers and game study scholars, we analyze game genres and sometimes even talk about specific games as well. And we are very glad that the project keeps growing – in September 2021 Jolina Bering joined us as the fourth member of the team!

But the project isn’t just a podcast – we also publish blog articles, sometimes in blog-specials like the last one about the worth of replaying where we had a lot of guest authors. In the past, Ben and Nicolas did surveys with data analyses as well.

By now, we also teach game development students in psychology, are invited to talks and interviews and have a lot of big dreams for the future, like working as consultants for game studios and establishing a regular twitch-stream one day. Until then we at least keep to releasing our podcast episodes every two weeks.

Thanks for taking the time to talk to us, Jessica!