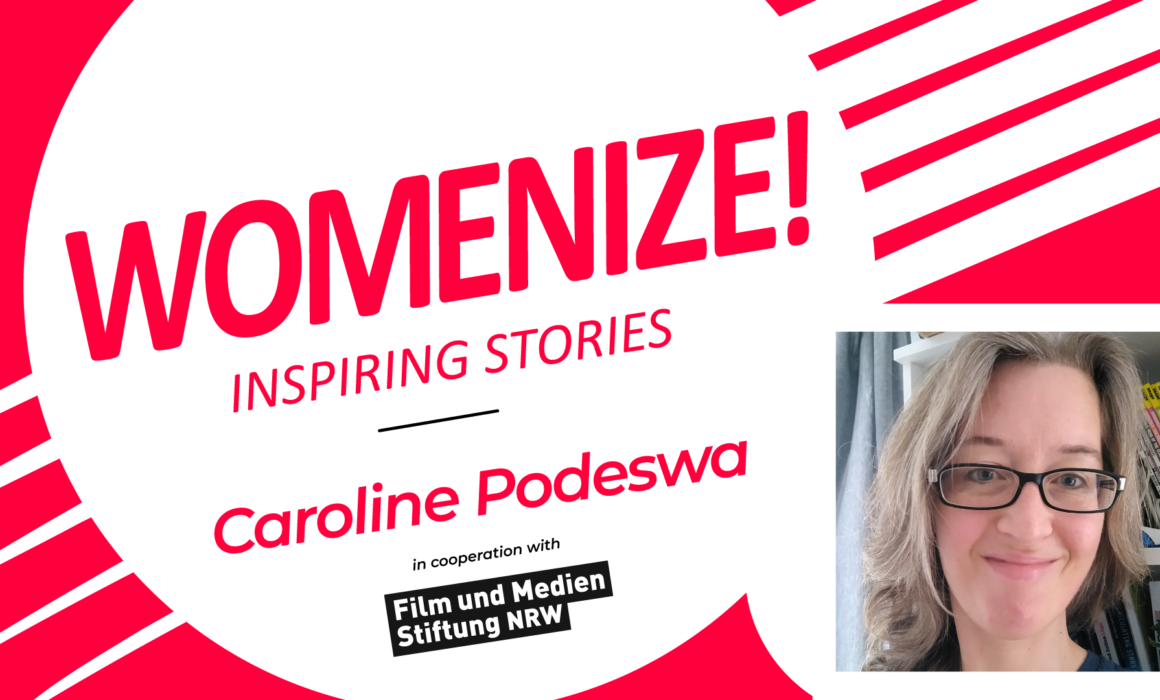 Womenize! – Inspiring Stories is our weekly series featuring inspirational women from games and tech. For this edition in cooperation with the Film und Medien Stiftung NRW, we talked to Caroline Podeswa, CEO at RobotPumpkin Games. Caro explains how she initially got started in the industry, as well as the challenges of running an own studio. Read more about Caro in this interview:

Hi Caro! How did you get started in the games industry?

Hi there! I originally studied Graphic Design in the state of North Rhine-Westphalia, Germany at the Hochschule Niederrhein in Krefeld. It was a tough time for me. While I enjoyed the digital classes (there were just a few back then), I didn’t see myself in the print or advertising industry, which everything was focused on. I kept asking myself if I’d made a huge mistake picking this degree program.

After I graduated, I knew it had to be something else – so I tried to get into the games industry, which seemed like the only option. With no professional experience in illustrating, animating and pretty much everything else, I applied as an intern at Upjers in Bamberg (which was one of the few German game studios I knew back in 2011). The folks in Bamberg were really great, and soon they asked me if I wanted to work there as a regular 2D artist. I learned a lot, made friends, enjoyed nature and good beer.

After one and a half years, I felt like I had to move on – so I applied for a job in Berlin. It all worked out and for the next five years, I worked, learned and laughed with a wonderful international team.

That’s how it all started – ten years after starting out in Bamberg, I’m still tinkering with graphics and game engines.

In your opinion, what are traits that make a perfect team?

Nothing and no one is ever perfect – but there are some traits that make teamwork easier!

First and foremost: communication. It’s so simple, yet so important. Whether something is going well or not, or you’ve just discovered a funny gif, a team needs to talk and share. The worst thing you can do is bury your head in the sand and isolate yourself.

You don’t have to be perfect – you have to be brave enough to ask for help. Even just talking to others and explaining the problem often helps to realize what’s wrong.

In sports psychology, there are different character types – the more balanced the team, the more harmonious and better the teamwork. This all sounds a bit clinical-dry, but I think there is some truth to it. In other words, you should surround yourself with people who think differently than you do in order to gain new perspectives. If I tried to create a game with two more Caro-clones, the result would be pretty terrible (and feature way too many robot-zombies).

Where do you invest most of your day to day time in your role as CEO?

I’m both amazed and horrified by how much paperwork is involved with having your own company. There are days when I realize that I have just spent half a day writing emails, printing & signing documents and other things you don’t associate with game development.

I think that this is something that keeps a lot of people from starting your own studio: there’s a lot of self-organization required to keep everything going. If you just want to create art, animate and focus on your work, it might not be for you – and that’s fine!

Creating art is also more fun than creating paperwork – but it’s exciting to step up and take responsibility instead of just doing as you’re told. If I hadn’t co-founded RobotPumpkin Games I would have never been able to create a game like “The Innsmouth Case”. I’m sure that would haunt me for the rest of my life.

Thank you for your time, Caro!