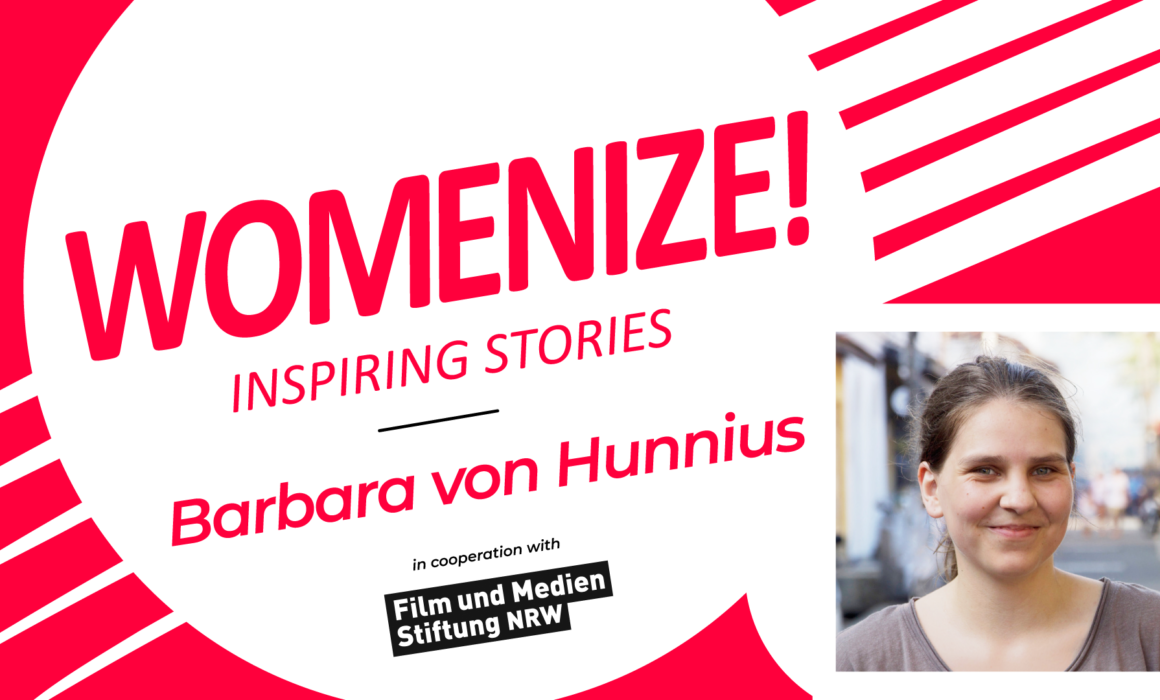 Womenize – Inspiring Stories is our weekly series featuring inspirational women from games and tech. For this edition in cooperation with the Film und Medien Stiftung NRW, we talked to Barbara von Hunnius, Programmer at the Good Evil. Read more about Barbara in this interview:

Hi Barbara, thanks for taking the time to talk to us! What made you want to work on games and how did you find your way into the industry?

I started using my parents’ computer when I was about 5 years old, “writing” in Word, doodling in Paint and aimlessly clicking around in Minesweeper. During primary school, I got my own computer and started to play games like “The Sims”, “Monkey Island” and the “Bibi & Tina” games. When I got a bit older I used the internet to learn some programming basics but I had this idea that I couldn’t make my own games because I am a really bad artist. But then, when looking for universities, I saw that the university in Cologne offered Media IT, focusing on programming for games and I knew that this was what I wanted to study. Fast forward 5 years, I was doing an internship as a QA Tester at Goodgame Studios in Hamburg and getting my first experience in the games industry while finishing my master thesis. After university, I started working at a small browser game startup as a frontend developer. The game never took off, so I ended up at the Good Evil.

the Good Evil strives to create games that make the world a better place. Why do you think video games have this kind of potential?

Games give people the chance to experience something instead of just reading about it in a book or watching someone else experience it in a movie which makes it easier to relate to it and to remember it. The “Assassin’s Creed” series lets me experience life in different periods and places and has taught me more about our history than school ever did. Simulations like “Simcity” or “Zoo Tycoon” help me understand economic dependencies and learn how to balance opposing needs. Playing games like “This War of Mine” or “Papers, Please” gives me insights that I would never get while just living my regular life and has made me face hard decisions that I wouldn’t face when watching a movie about war. Games manage to do all that and more, a lot of the time without the player actively noticing that they are currently learning something new or broadening their horizons.

At the Good Evil, we are currently working on “Rascal’s Escape”, a jump and travel adventure for Nintendo Switch and PC to be released in 2021. While traveling with Squirrel and Bear, players can experience the cultural diversity of the European countries, like various foods, sights, habits and languages.

I strongly believe that games can help us get a better understanding of each other and our surroundings.

The job of a programmer is still regarded as a “male-dominated” profession that a lot of women don’t even take into consideration as a possible career option. How have you experienced this, and could you notice any changes or development regarding this stereotype?

Before I started university, I was really concerned with what to expect there. None of my female friends were interested in games or programming and I was scared that I wouldn’t be taken seriously by the male students. Fortunately, I didn’t let those concerns stop me and had a great time at university. Yes, there were more men than women in my classes but what was more important was that I found friends that shared my passion for games. I’ve never experienced people treating me badly because I was a woman at university or any of the jobs I’ve worked so far. Going to events is a bit different: some people will be surprised when they hear I’m a programmer, others will answer the technical question I asked while facing my male colleague who isn’t even interested in programming or will make very questionable statements about female programmers in general. For me, those were just exceptions to a mostly positive experience but since I know that not all women are as lucky, there is always a little voice in my head telling me that I have to work harder to prove that women can be good programmers as well.

When I was growing up, female programmers weren’t visible to me but with social media and global connectedness that has been changing a lot during the last few years. There are a lot of programs, events and communities both for women in gaming and also for female programmers, “Womenize!” being one of them, the “FemDevMeetup” is another one I really like. I think having those initiatives plays a big role in not only offering a safe space for women who are already working as programmers but also to inspire young girls who love computers to pursue a career in programming or games.

Thanks for your time, Barbara!