Womenize! – Inspiring Stories is our weekly series featuring inspirational women from games and tech. For this edition we talked to Juli Bierwirth, Illustrator & Co-Owner at Distant Rabbit Games. Read more about Juli in this interview:

Hi Juli! Could you tell us a bit about your main challenges and learnings building up a board game company?

Wow, yeah, I had to learn some new skills very quickly in this last year, but probably the hardest part of starting Distant Rabbit Games was building credibility. As important as it was to build a big audience through marketing and media, it was even more important to earn the trust of that audience. I needed people to believe that we had built a great game (“Mantis Falls”) and to trust that we could, and would, deliver on a promise. Those are hard goals to achieve when you can’t point to any legacy of success.

Because we can’t fold time for our customers, we had to demonstrate our seriousness in other ways. We gave away the tabletop simulator mod for free so that people could play the game for themselves. We solicited dozens of reviews and even won some awards, all of which customers could use as unbiased evidence from industry professionals that the game exists and works well. Finally, we met with seasoned publishers who became advisors for us. We had to own the fact that we were “green”, but we were able to refer doubters to the successful publishers who were helping us nail down the details.

What is “Mantis Falls” about and what makes it special? 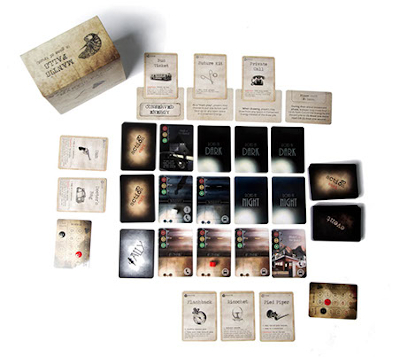 In the game, you play a citizen of the 1940’s mob-ruled mountain town of Mantis Falls. You have seen something you weren’t supposed to see and now people are coming for you. You have to escape the town as fast as you can, but you’re certain you won’t make it alone. Fortunately, you have some powerful friends at the edge of town who know of another witness in a similar predicament. They arrange for the two of you to meet at a diner and make the dangerous walk together, protecting each other along the way. But as the trek gets more dangerous you become suspicious that your ‘fellow witness’ is, in fact, an assassin.

“Mantis Falls” is unique because it allows for an immersive and strategic hidden traitor mechanic at a very low player count. Normally a hidden traitor game wouldn’t work for two because both players would immediately know who the traitor was. Because this game is “sometimes cooperative”, a witness has a 50/50 chance of being with another witness. In that case, the game is cooperative and both must survive to the end of the road for either to win. But if there is an assassin the game is kill-or-be-killed. Witnesses don’t know which game they are playing, so they must be as ready to save the other player as they are to kill them. Further, assassins are incentivised to delay their betrayal until late in the game when the witness’ protection is weakest. As a result, all players (witness and assassin) spend the first half of the game collaboratively dispatching harmful events and trying to prove their trustworthiness. The betrayal, if and when it comes, feels quite realistic. Equally realistic is the joy and catharsis of a cooperative win.

What I love most about “Mantis Falls” is that I really feel it (blood pumping, emotions high) in a way I’ve never experienced in another game.

How did you decide on a graphic style for the illustrations?

The goal for “Mantis Falls” was not to tell a mob story, specifically, but to evoke genuine trust and betrayal. To keep the focus on the players’ experience, we decided not to depict individual mobster characters or particular events. We decided the art for the action cards should be a sparse pen-and-ink lithography style that would both ground the game sometime in the past and, alongside occasional flashes of red text, conjure a mildly horrific interpretation. Our roads feature empty streets and our adversaries and allies take the form of silhouettes and shadows, all of which is designed to allow players to fill in the blanks for themselves (and even change the story every game).

I think every player has their own unique vision for what betrayal looks and feels like, so we left much of the storytelling to allegory and metaphor. A double-edged card entitled “pied piper” depicts a rat and a lute and allows players to heal… on the condition that they die if they ever reach the end of the road. In contrast, the card “a show of trust” allows a player to show their hand to their partner, and invites their partner to return that gesture. That card’s illustration references “the hedgehog’s dilemma”; the idea that increasing closeness brings protection and warmth, but at the risk of injury from within.

While we wanted to leave much of it open to interpretation, we also wanted “Mantis Falls” to feel like a real place. The interior of the box has a large and detailed map of the town and some locations, like the diner where players begin and the edge of town where the titular waterfall is located, were meant to feel like “canon” in this fictional world. The hope was that even when players don’t know who they are running from, or even what they saw in the first place, “Mantis Falls” still feels dangerous and real.

Thank you for your time, Juli!