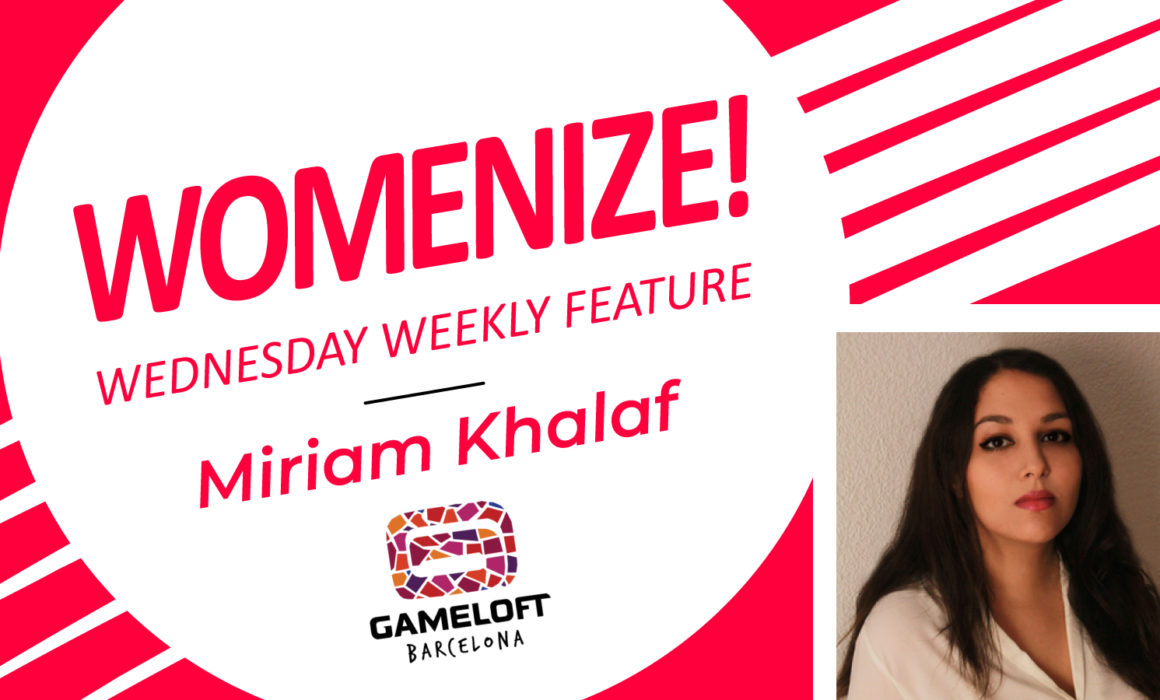 Womenize! Wednesday Weekly is our weekly series featuring inspirational women from games and tech. For this edition we talked to Miriam Khalaf, Junior Game Economy Designer at Gameloft Barcelona. Read more about Miriam in this interview:

Hi Miriam, thanks for taking the time! First off, let us start with your career – can you tell us a bit more about your journey towards your current job position?

To be honest, mine was just a combination of both luck and stubbornness. Once I finished college, I got an unrelated and absolutely exhausting job that allowed me to get by, and I guess that’s partially what fuelled me to just keep sending CVs to any position related to videogames I could find, day after day, no matter what. It was frustrating, and after a few months I just didn’t know what to reply to the question “what can YOU offer to this position?” anymore. Because I just really, really wanted to be there… just like everybody else. “I don’t know, I can make really good coffee…I guess”. And as in a world where companies have coffee machines that’s definitely not enough, I spent my free time doing online courses, watching conferences, sending emails… and one time, after about a year of getting rejected, I got a reply from Gameloft asking if I’d be interested in taking an Excel exam to test if I was suited for the position.

So I said “of course” and then spent almost every night that week doing Excel courses because, to be honest, I had literally no idea about Excel formulas. I got to that test insecure, sleepy, and absolutely terrified, and, somehow, it worked.

After that I started working as a playtester, where I started analysing difficulty balancing and progression. Soon the department evolved to Economy Testing, and after some time I became its manager. We were also benchmarking and deconstructing other projects, and acting as support for GEDs. And even though playing games for a living is one of the best things in the world, I knew that this job position wasn’t going to make me happy forever. Luckily, I had the means to continue my training, incredible professionals to teach me, and eventually switched departments to start working as a GED. And that’s what I’m doing now.

What does your typical work day at Gameloft look like? What are the tasks of a Game Economy Designer?

Well, as you can imagine, we do Excel (…sorry, I really couldn’t help it).
It depends a lot on the game you are working on, but mainly our day to day consists in designing and balancing systems. There’s a lot of behavioral economics involved with that, as creating gatings in progression, currency sinks, difficulty walls and, overall, managing victories and frustration, requires a delicate balance, especially in freemium.

The main goal is simple: your economy design needs to “keep it together” in the long run (we aim it to last above 3 years, and some top games have been there for 7 or 8 years and counting). In a premium game that’s meant to last 40 or 80 hours, players getting too much currency or XP is bad, because they won’t experience the game as you planned. But in freemium it’s catastrophic.
It’s necessary to mention that the gap between players does nothing but grow, as progressing won’t mean the same for people who’ve been playing for three years and people who just arrived yesterday. A GED needs to understand their needs, and to provide time limited content, challenges and successes for all of them.
So with that in mind, we decide gacha droprates, prices and rewards, establish difficulty and currency gatings, how much experience players are going to earn based on their progression, content exhaustion speed, and so on. We also make time-limited events considering the content we are going to be able to release in a given period of time.
Once all of that is over, we analyze how everything performed, try to determine how we can increase the games’ KPIs, and continue iterating based on that.

A lot of people dream of working in the games industry, but might be unsure which kind of job would be the best one for them, or they feel discouraged after being rejected from companies they applied to. Which advice would you give to someone who wants to overcome those insecurities?

We grow up internalising we are not good enough in so many small day to day interactions, we barely notice it’s pulling us down anymore by the time we have to decide we are worth to step up. There are so many times I’ve been about to give up on my dreams and try to convince myself that it doesn’t matter anyway. But that’s just not true.

And if I had to pick one thing to tell them, then it would be this: “You have value. Your dreams and professional goals have value. So stop finding excuses and send all those resumes you are holding. It doesn’t matter if someone thinks you might not be good enough. Because you are. Because you are going to prove them wrong. And, above all, because there are so many chances out there for you the only way not to get them is not believing you deserve to be there.”
And it’s true, it’s easy to feel discouraged by the lack of knowledge about certain positions, or even our own capabilities if we accomplish it. But that’s the thing: we never know which kind of job is going to make us feel challenged and motivated until we try it. But trying is always worth it, and companies are always hiring!

Thanks so much for sharing your experiences and advice with us, Miriam!