Womenize! Wednesday Weekly is our weekly series featuring inspirational women from games and tech. For this edition we talked to Lucy Morris, Studio and Creative Director at Starcolt. Read more about Lucy in this interview: 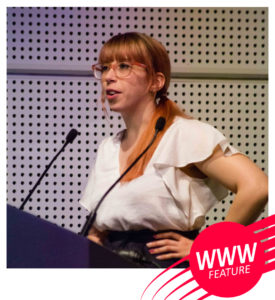 Hi Lucy! You are the Studio and Creative Director at Starcolt, previously you have been working in various positions such as Lead UI Designer, Level Designer and Community Manager. How did you land your first position in the games industry?

Games are something I’ve always been passionate about ever since I was a child – but growing up, it wasn’t really a profession that was ever floated as possible, partially because New Zealand’s game development scene was very small back then, but also tech careers weren’t hugely emphasised to those of us at my all girls’ school. After I graduated from university, I moved to Germany and suddenly a career in games seemed possible as I was surrounded by many large, established European studios. Although I studied degrees that I intended to use to go into foreign policy & government diplomacy, I ended up using those skills (funnily enough) to land my first job in Duesseldorf at Ubisoft BlueByte doing EMEA community management. Diplomacy for sure!

Starcolt’s first game, “Best Friends Forever”, is a sim game about dating and dog raising. You are also doing academic research in the area of romance in games and are part of the podcast “Lovegames”, where you talk about love, romance and sexuality in games. What is it that drives your passion for these topics?

Good question! I think I’ve always been fascinated about connections between people, relationships and all the feelings inbetween. Love is one of the most powerful emotions and motivators you can possibly experience, and exploring the stories around that has always been super interesting to me. I love a good romance story dopamine release, and especially with regards to games, a solid relationship narrative is still fairly uncommon, much less diverse relationship narratives. Games are such an interactive and expressive medium that we have so much power as creators to bring players with us through truly feeling these stories, or forging their own. I think that’s why I love making games – and experiencing them – so much. You have the ability to literally give people warm fuzzies, to make players care about characters and their journeys.

It has now been one and a half years since you have founded Starcolt. What are some things you have learned and would like to pass on to other people who just started their own game development studio?

Wow, time flies! One thing I will say is that running a studio has definitely been a harder undertaking than I could’ve ever imagined – intensely rewarding, but incredibly hard nonetheless. I think a lot of the day-to-day of studio heads is pretty hidden as it’s difficult to talk about the challenges of a job when you’re also an employer, but my advice to others who want to do the same would be: Find yourself a mentor, someone in a similar position to you who has years of experience on you. A mentor is valuable in any role, but especially as a studio director – they will have encountered a lot of the road blocks you might, will have a bunch of great advice and are also a good soundboard for you if you need assistance. Be transparent that you’re also learning. I don’t think anyone is born a great manager – people management is a skill that’s generally learned like everything else, especially as it’s largely dependent on what your team makeup looks like. Be honest with your team that you’re imperfect and that you might make mistakes, that you’re also on a journey of learning and that you’re doing your best. Admit to errors when you make them, and be transparent about ways you’ll avoid making them again. You’re only human, and you can only expect things from yourself that you expect from those working for you. Have a plan B, C, D and E. Maybe an F. Nothing in game development goes as planned. I like the saying that ‘games are an alchemy, not a science’ – we have constant technology changes, platform developments, genres that are in vogue, event deadlines that come up at short notice, and slews of event cancellations like we’re experiencing this year. Don’t marry yourself to one ideal plan of attack – make sure you have backup plans for all major goals you’re working towards. Be ready to pivot and kill your darlings (not necessarily ‘delete a game 90% of the way through production’, but be willing to prioritise what will benefit your studio and cut what doesn’t contribute towards that, as much as you love it).

Thank you for your time, Lucy!